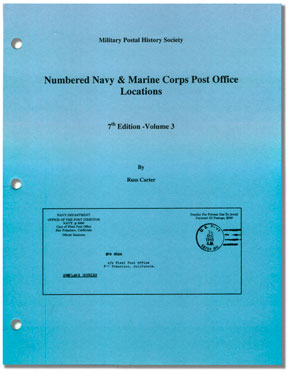 The numbered Post Office codes used by the Navy, Coast Guard and Marine Corps were an attempt to hide the locations or unit type. This volume is the culmination of several years' research in the national Archives and U.S. Postal Service library to try to fill gaps of previous editions.

While there are a good number of newly discovered Post Office numbers, the real contribution of this edition is the thousands of added locations to Branch locations.

This book begins with an introduction to the Navy and Marine Corps postal coded numbering systems. It is followed with a detailed listing of Navy Post Office numbers, then by the Branch numbers used by the Navy, Coast Guard and Marine Corps and finally a listing of the Marine Corps Unit numbers that was used early in WW II. Each section contains illustrations of both common covers and a few oddities created by the numbering systems. Last but not least, the numbers and the countries in which they were used are included.

This study has 287 pages and includes 37 illustrations.