A new study on World War I military postal history

This study concerns the many American Air Service squadrons and subordinate units that were stationed in the British Isles during World War I, and were required to use the British civil postal system. Included are a listing of all reported Air Service units, the British Royal Air Force locations used by those units, and a listing of post offices available for use at each location.

Also included is the background of the Air Service in the British Isles and a discussion of postal and censorship operations. This study has 89 pages and includes several reproductions of covers. 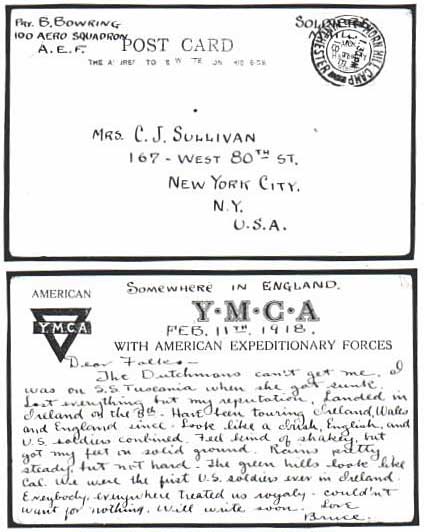 This soldier was on board the S.S. Tuscania when it was sunk by a German submarine on February 5, 1918. The card is cancelled February 12, 1918 at Morn Hill Camp, Wiltshire, where all survivors from the sinking were assembled. The writer describes his ordeal in the message.