In this issue of the MPHS Bulletin the lead article is "Peacekeeping Forces in East Timor," which discusses both the history of East Timor and the peacekeeping forces that have arrived there since the militia uprisings last Fall (Autumn 1999). Illustrations include postmarks used by the Australian forces. 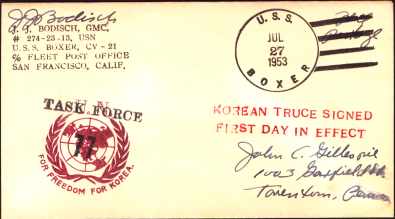 This issue of the MPHS Bulletin is devoted entirely to the 50th anniversary of the Korean War with numerous articles on the conflict.

One of the most prolific producers of philatelic covers from the Korean War was John Bodisch, a gunner's mate in the aircraft carrier USS BOXER (CV-21). The carrier made four deployments to Korea, one during each year of the war. This cover commemorates the truce that ended the fighting in Korea.

In addition to a brief non-philatelic summary of the war, the issue contains a comprehensive article on the war by Norm Gruenzner, an expert on the "Police Action," illustrated with numerous covers from his collection, and including a summary of the forces involved.

Graham Hurd provided a look at the British and Commonwealth forces that participated, and Stanley Luft offers a look at the French forces and their mail, with commentary on how to distinguish this mail from letters that originated in Vietnam, where French forces were fighting at the same time.

In this issue of the MPHS Bulletin the lead article discusses the U.S. involvement in Latin America as "policeman" in Nicaragua. There are several postal markings used between 1927 and 1933 by the Marine Corps in this action.

Pages created by The Swanson Group .